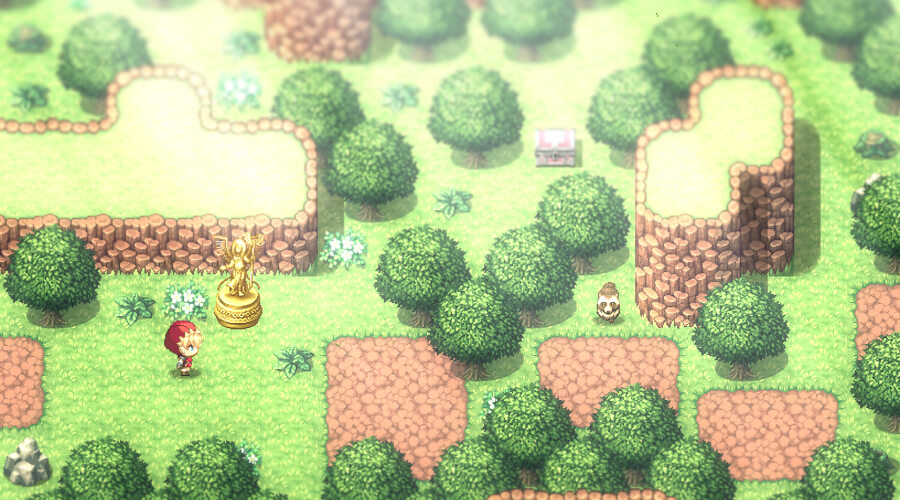 Wildsilver has been in development for quite some time now. A so-called ‘Demo’ has been released in 2021, and since then, new screenshots from the full version of the game were regularly shown on Instagram and Facebook. However, I think it’s time for a more detailled update.

When I started working on Wildsilver, my estimated release date was autumn 2022. Unfortunately — or, in fact, fortunately —, the game will be in development a little longer.

What are the reasons for the postponement? What’s the current status of the project? When will the game be released? Grab a coffee or a beer, lean back and let me tell you.

First of all: Yes, Wildsilver is coming along pretty well. If you’re following me on Instagram, you can tell I’m continuously working on the game. The gameplay is actually almost done (90%? 95%?), so it’s very much a matter of aesthetics now. Polishing, as you call it.

There have been some major changes compared to the ‘Demo’, of course. That was pretty much inevitable, since games tend to evolve during development. For example, I changed a lot of the skills the heroes learn. The mystic equipment you find in the full version is, for the most part, completely different from the Demo. The enemies have been reworked in terms of their stats and abilities.

For the tilesets and some objects I’m now using a LUT (Look up Table) to achieve visual coherence while using assets from different sources. The reduced saturation also contrasts nicely with the more vibrant character sprites, I think.

Additional plugins have been implemented. VisuStella haven’t stopped releasing, and so I have included a number of their new plugins, for example Lighting Effects and Ambience Sounds. Again, if you’re following me on Instagram, you have seen the visual effects that were added. Tilt shift for example, the blur effect you probably know from the Link’s Awakening remake, Octopath Traveler or Live A Live.

All in all, the full version will not only be much longer than the Demo (around 12 hours, I guess), but also more interesting and more beautiful. And like all my other games, it will also feature a custom soundtrack!

So, how does developing a game like Wildsilver actually work?

I don’t know for sure how others do it, but I use Notion to keep track of the various aspects of the game. Here’s a list of the Notion pages I’m currently using for planning and documenting game elements:

In addition to that I write down a lot of stuff on paper, which I then digitalise piece by piece.

So, what am I doing at the Moment? There are two pages I use daily. They contain the information I need to actually work on the game.

As explained, the ‘Sprint’ page contains all the tasks I want to complete, the tasks I’m working on as well as a documentation of tasks completed.

Slowly, but steadily, these tasks will all be moved to the ‘Completed’ section. Then it’s time to move some of the ‘To do’ tasks into the ‘Working on’ lane. There are, at the moment, 22 tasks ‘done’ and 27 tasks ‘to do’.

The backlog is similar to the ‘To do’ section of the Sprint page, but here, I collect ideas I’m not as sure about implementing. They are categorised as ‘Must have’, ‘Should have’ and ‘Could have’, but even the must-haves need another review before moving them over to Sprint and planning their implementation in detail.

The backlog has gotten pretty long …

My girlfriend and I are currently playtesting whenever we get the chance to. We’re making progress. The first act, so to speak, has been played, and the fixes and improvements have been made — that’s about a third of the game.

So, what’s the Plan now?

I have said a few times that Wildsilver is supposed to be my ‘magnum opus’. Of course, I would hope that games I develop in the future will be even better than Wildsilver. But for the time being, this proclamation has proven to be a source of ambition and motivation for me.

That does mean, however, that I want to be super sure about the quality of the game before I would consider a release.

When could this release happen? While it is difficult to come up with an estimation of a release date, I shall try to complete the remaining tasks in Q1 2023. Just like the term ‘magnum opus’ serves as a guideline regarding the quality of the game, a release window helps me maintain a reasonable focus and make strict decisions as to what can and can’t be done, realistically, until the, albeit self-imposed, deadline.

Other than that, I would like to make known that RPG Maker Unite doesn’t concern me at all. There will be some hype around this new engine, and there will be people who lose interest in RPG Maker MZ and move on to the next instalment. And I would be among them, of course, would Unite look any more compelling to me and would I not have this huge MZ project to complete.

You can read more about my thoughts on the topic in this post.

What I am still hyped about is VisuStella: Those guys are still adding features to their plugins and releasing new ones from time to time! I will continue enhancing Wildsilver using the fantastic VisuStella plugin library. Let’s see if there will be another major improvement like the one made possible with the Bright Effects plugin (bloom, godrays, tilt shift), Movement Effects (footstep sounds, dust clouds when dashing) or Lighting Effects (subtle lighting of areas and objects).

Any Help is welcome!

With Game Master, Game Master Plus and LV99: Final Fortress having been made entirely my one person — except for the vast majority of the assets, of course — you may say that I have some experience developing and releasing games on my own.

There are several things, however, I could use some help with in order to make these aspects of the game really shine.

Sure, Wildsilver looks pretty good already, if I may say so myself. I found some great resources, and the VisuStella plugins also help a lot with making the game visually appealing.

That said, some custom graphics would be awesome. Maybe more character poses and face expressions? Some Effekseer animations? VisuStella action sequences? Tiles and objects replaced with better versions to really get the most out of the various environments the game offers?

I would also appreciate any help concerning background sound loops and sound effects. My folder where I collect these contains some great stuff from talented sound designers, but to be honest, some of the sounds I’m currently using have been compromises.

I have become much better at coding JavaScript while working on Wildsilver. Many effects I would have commissioned a scripter for in the past I could implement myself using VisuStella JS notetags.

However, a dedicated coder for the project would allow me to ‘think outside the box’ more often and maybe make some skills and items even more interesting than they are.

Well, I thought I would enjoy working on gameplay and hate working on cutscenes. It turns out, though, that eventing cutscenes can be fun!

But I know there are people way more talented at creating effective cutscenes than I am. I would love to get one of them on board and have them revise and refine what’s there and/or add new cutscenes to tell the story and convey the characters’ emotions even better.

While my girlfriend does an excellent job testing the game at the moment, a game needs more than one playtester.

In fact, a complex game like Wildsilver should be played by a large number of people in order to find all the bugs and other issues there may be.

Write me an E-Mail!

If you would like to help in any way, please get in touch! Write me an e-mail: saireau@greatpotiongames.com.

You see, it’s still a long way until Wildsilver gets released. But for the most part, it’s actually a fun process! Polishing a functional game is a game development phase I actually enjoy. And I think every hour spent on it will be totally worth it.

If you want to help, please get in touch!

Did you find this interesting? What other information would you want me — or other developers — to share?