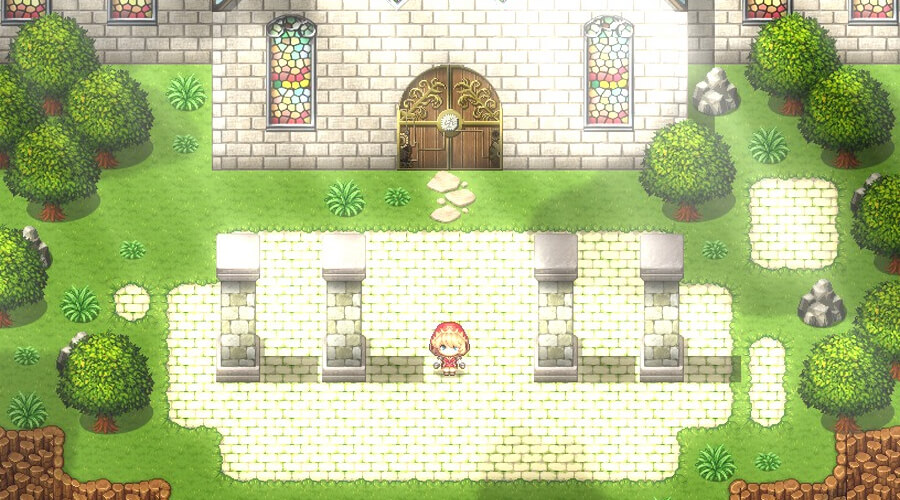 Wildsilver will be the most complex Great Potions game and will need quite some time in development. Therefore, a demo has been released on Steam to at least give you a glimpse of what is coming — and to make sure the battle mechanics are actually fun before I dive deep into creating the game around them. Please play the demo and give some feedback!

After months of planning and then months of work, the Wildsilver demo was released on Steam on May 29.

It can now be downloaded and played for free by anyone with a Steam account.

You do not have an account? Creating a Steam account is also free and makes total sense for any PC gamer. Steam is the largest platform for digital games, many of which are frequently on sale. Some games see price reductions of 50% or more — my own games (Game Master Plus and LV99: Final Fortress) included.

If you do not wish to join Steam for some reason, do not worry, though. There are now two other platforms to download the Wildsilver demo from:

As mentioned in my previous article, a game demo just makes sense. Period. Really, it is that easy.

So, why not take advantage of the medium and opt for an iterative approach towards perfecting your game?

Releasing a digital demo early offers a great opportunity to work on the most important things — that is, the gameplay — in a focussed way. WIth a short demo, your iterations become shorter too, and thus, you can do more of them in less time.

Receiving valuable player feedback as messages and e-mails and watching video playthroughs (Gaming Culture, Bugfragged), I will update the demo regularly — which I have done with version 0.4.1 already.

What’s included in the Demo?

As I wrote on Steam, the demo includes most of the characters, skills, equipment, items and enemies that are planned for the full game.

There’s no plot, however, no quests and no puzzles. The game elements and locations may or may not be part of the full game. I’ll try to incorporate the existing maps somehow, because I think they turned out pretty good, but maybe there won’t be any room for some of them.

Quick disclaimer: Your save file will also not be compatible with the full version.

That said, the demo is kind of its own game anyway. It is a complete and hopefully very enjoyable experience.

Playing it, you will progress quickly through the areas and – by collecting orbs that grant EXP – through character levels. You will find new equipment and learn new skills very frequently, and I would encourage you to use every new piece of equipment and try every new skill immediately. There is a final boss battle, and there are credits at the end.

Thus, you may also call the Wildsilver demo an ‘accelerated JRPG’.

The demo has a playtime of about 4 hours that apparently go by very quickly. There is nobody stopping you from replaying the demo, however, and you may even want to do that and try different character builds.

Letsplay or stream the Wildsilver Demo!

In case you are a letsplayer or a streamer, you may wonder whether you can or should play the Wildsilver demo on your channel. The answer is:

Not only does your playing the game increase its audience and the amount of feedback that will go into the full version, I am also interested in watching your playthrough myself. When I watch people play my games, I am always taking notes, which in the end usually results in a patch (or at least some kind of hotfix). There is nothing more valuable than watching a letsplay in terms of optimising certain aspects of the game.

Should you have played the demo already, please consider revisiting it from time to time as I make changes to characters, skills, equipment or enemies. You might be playing a completely different game in a few months — who knows? Keep an eye out for any patches and the corresponding patch notes I publish.

When will the full Game be released?

The release of the full version is planned for autumn 2022. This date may change, though. I am currently trying to complete 10% of the game per month, but as you can imagine, some areas may unexpectedly need some additional attention. Sometimes a concept is just good on paper and does not work very well in practice.

As friends and family know, I am always doing my best to adhere to my own deadlines, though, so there is well-founded hope you will actually be able to play the game as soon as stated. If not, well, you can always play the demo again, right …? Make up your own story …? Just kidding. Mostly.

I may or may not release an early-access version before the actual release too. I would like to try it — just for the sake of it, you know? —, but maybe the effort is not worth it for one or two months of what is ultimately some kind of ‘open beta’. We will see. Let me know what you think.

Give it a Try now!

Now that you are informed about what to expect and what to give feedback on, it is finally time to head over to Steam and download the demo.

… and then find the Demo button. The game will be downloaded and installed within a few minutes (it is about 500 MB in file size), and you are ready to go!

While you play, please pay special attention to these things and take notes:

You can leave your feedback here or send an e-mail to saireau@greatpotiongames.com.

Thank you for your support!

PS: If you like the demo and cannot wait to play the full version, why not give Game Master, Game Master Plus or LV99: Final Fortress a try in the meantime?

2 thoughts on “Wildsilver Demo: let’s make this an awesome Game!”